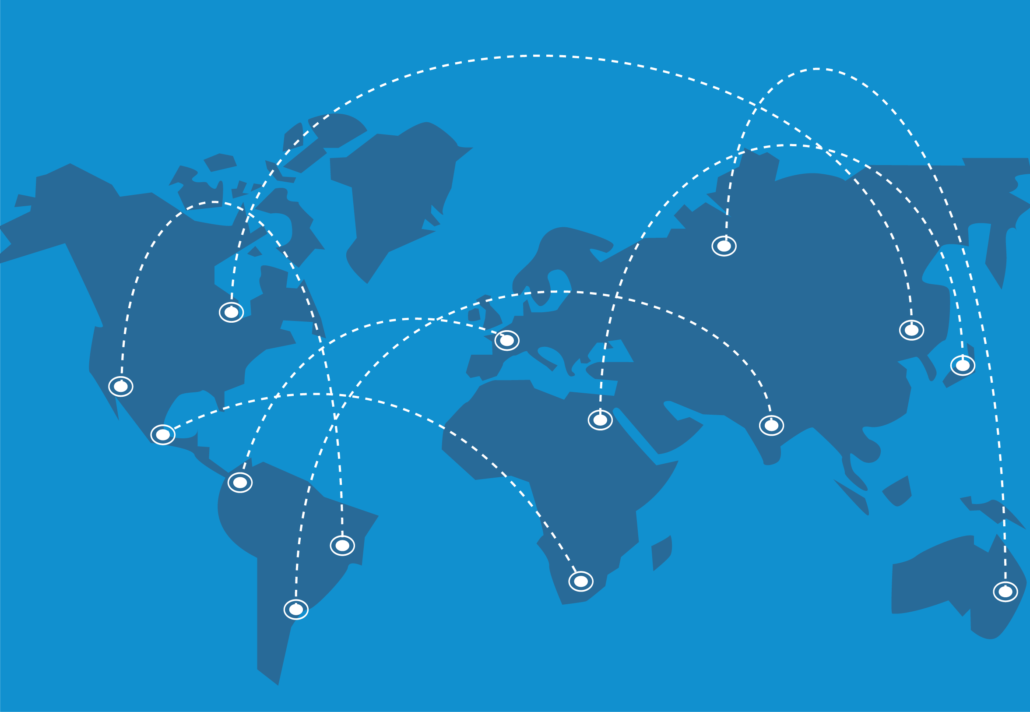 The rules and dangers of merchanting

Besides import and export, traders can make profit by purely acting as middlemen in international transactions. This is called merchanting – a potentially lucrative, but also dangerous form of international business. Let’s have a look at the fundamental rules and risks of merchanting.

A merchanting deal is a triangular transaction between a trader, a supplier, and an end buyer in three different Customs and financial territories. In a merchanting transaction the trader is not importing or exporting goods, but sending it directly from its origin (the supplier’s country) to its destination (the end buyer’s country) for profit. For example, a merchanting transaction can involve a trader in South Africa who orders goods from their supplier in China, to be delivered directly to their client in Europe. 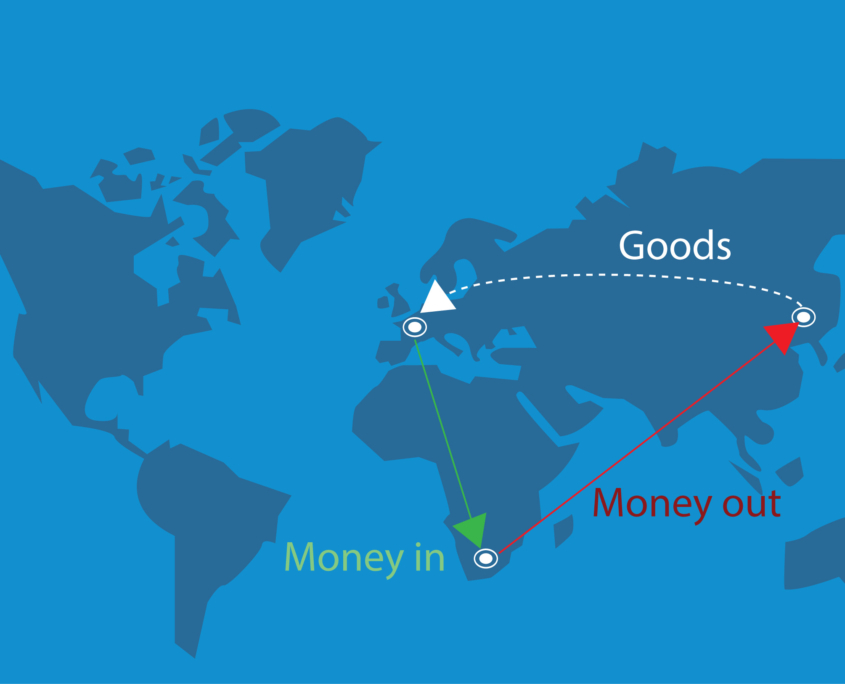 In this scenario the local trader never touches the goods, so it sounds like easy money, but a merchanting transaction that is handled improperly can cut the trader out of future business and land them in significant legal trouble.

Let’s look at the most important hurdle first: Any merchanting transaction must be compliant to South African Reserve Bank (SARB) laws.

The technical difference between import-export and merchanting

With export, goods leaving the country are cleared by Customs and linked to a payment coming in via the Reserve Bank. With an import this process is reversed. The purpose is to monitor and ensure that South Africa’s wealth grows or, at the very least, remains stable.

In a merchanting deal, however, SARB cannot link the in- or out-bound funds with a movement of goods. This does not necessarily pose a risk to South Africa’s wealth. In a deal where the South African trader gets paid before paying their Chinese supplier, there is no risk of loss from the Reserve Bank’s perspective, but what if the South African pays first?

Depending on the merchanting transaction, the local trader can send money out of the country to pay a supplier, but accept payment on credit from their end buyer. If the end buyer defaults on this payment, from the Reserve Bank’s perspective, it looks like money laundering. Even if the trader’s intentions were not criminal, the loss of South African wealth remains.

To minimise the potential loss of wealth, as well as money leaving South Africa illegally under the guise of a merchanting deal, SARB applies strict policies to these transactions.

1.     Permission from an Authorised Dealer

According to the SARB Currency and Exchange Guidelines for Business Entities, a company who wants to undertake any merchanting transaction must first apply for permission from an authorised dealer – their bank. This includes submitting a sales agreement between the foreign supplier and the South African trader and one between the trader and their foreign buyer, including commercial invoices.

You can also have a forex dealer assist with this application and manage the payments for you via your foreign exchange account to make sure it is compliant.

If the transaction is approved, it would be on condition that the time-lag between paying funds to a foreign supplier and receiving funds from a foreign buyer does not exceed the SARB limits. This limit consists of 60 days for trade with counties in Africa, and 30 days for countries outside of Africa.  The bank will also require the incoming payment to originate from a foreign account and exceed the outgoing payment. In other words, there must be a profit.

If the deal results in a loss of South African wealth, the trader may be legally implicated at the Financial Surveillance Department’s discretion. Naturally, some deals end in a loss due non-payment, plummeting market prices, fluctuations in the exchange rate, or freight delays. If the Reserve Bank finds the trader made every effort to ensure a profit, but still failed to deliver it, no one goes to jail. They would, however, not easily grant the trader permission for another deal involving delayed payment.

Because there are such stringent controls in place, SARB recommends that merchanting transactions are paid via letters of credit, especially where there is a lag in outgoing and incoming payments. This is however not a legal requirement.

A letter of credit is a payment method by which the buyer’s bank holds funds and releases it to a seller’s bank upon the presentation of documentary proof that the goods are delivered according to the sales agreement. These transactions are notoriously expensive to set up and difficult to manage as any discrepancy in paperwork can result in non-payment.

Knowing when an international deal is a merchanting transaction seems easy, but it can be confusing. The following circumstances are often misunderstood as merchanting:

For exchange control purposes, South Africa, Lesotho, Namibia and ESwatini form a single Common Monetary Area (CMA). Together these countries have a common financial border, not to be confused with the common Customs border formed by the Southern African Customs Union (SACU).

This means money that moves between CMA countries is not considered foreign currency, and therefore a transaction between traders of these countries cannot be merchanting.

As opposed to merchanting, which only involves the in- and out-bound movement of money, a cross trade involves the export of goods with payment originating from a different country which is not the country of import. For example, a multinational company purchasing machinery in South African for an operation in Nigeria, but paying from their head office in Europe. In short, there is still an export or import of goods from South Africa’s perspective.

In practice, the terms “merchanting” and “cross-trade” are often used interchangeably, but the regulations of these two transaction types are significantly different. In either case, it is in the South African trader’s best interest to collect money first before sending goods or money out of South Africa.

A merchanting transaction can involve having goods travel through South Africa in bond, but the legal timeframe for payment must still be adhered to. If the trader paid the supplier and is sending the goods to a country in Africa, for example, they only have 60 days to receive payment, regardless of how long the goods are still allowed to be kept in bond.

If the goods are ever cleared and taken out of bond while it is still in South Africa, the transaction is an import – not merchanting.

Why does this matter?

When money travels in and out of South Africa (and the CMA), the trader’s bank submits a Balance of Payment (BOP) declaration to the Reserve Bank. This declaration includes a procedure code which can imply various forms of import, export, or payments for services. The procedure code tells the Reserve Bank what type of transaction the transfer of funds represents, and therefore which laws apply.

The correct BOP procedure code for incoming or outgoing funds representing a merchanting transaction is 110. When an incorrect procedure code is used, the trader may be operating outside of the legal limits of the transaction and South Africa risks a loss.

Because merchanting transactions do not involve the import or export of goods, there are no Customs duties payable by a South African middleman. VAT is applicable, but may be charged at the zero rate, depending on the nature and submitted proof of the merchanting deal.

In a transaction where the South African trader controls the freight, a freight contract must be submitted along with the sales agreement and commercial invoice. The freight contract must show SARS that the goods went from the supplier to the end buyer without entering South Africa. In addition, the trader must show exchange control complaint payment of the goods. For the trader to sufficiently control the freight they must take out a contract with a carriage provider in their own capacity where they are fully liable for the cost of freight.

A merchanting transaction where the end buyer controls the freight may also be subject to VAT at the zero rate. However, the trader must still indisputably prove that the goods never entered South Africa. From a VAT perspective, the documents required to do so are proof of an exchange control compliant payment, and proof of handover in the supplier’s country to a carriage provider. Because the South African trader has less control over whether they receive such a document, this scenario carries some risk.

Practically speaking, the end buyer rarely arranges the freight in a merchanting transaction, because this would give them access to information regarding the supplier and the cost price of the goods via their freight forwarder. This brings us to our second biggest concern with merchanting – keeping things confidential.

Separating the supplier and end buyer

To preserve future business, the South African trader must keep their supplier in the dark regarding who their buyer is and what they are charging the buyer for the goods, whilst also keeping the end buyer from seeing the supplier’s details and invoice.

Merchanting most often happens via Sea Freight because, practically speaking, it allows for more time to move documents and make these arrangements while the goods are in transit. Air freight is more complicated, and direct cross border transactions are nearly impossible because the outgoing and incoming commercial invoices are in the same place at the same time.

It is not illegal for export and import clearance to happen with two different invoices, but the country of import will want to know in what way the trader added value to justify their mark-up. If the import Customs authority finds the selling value to be inflated, they may refuse entry of the goods.

As with the freight, the South African trader is best off being the party contracting for insurance. This is the simplest means of keeping the selling and buying values of the goods confidential.

From a South African freight forwarder’s perspective, whether or not a merchanting transaction complies to Exchange Control laws is not for them to determine. However, subcontracting a foreign service provider or shipping company to carry out the service also involves money leaving the country and no goods coming in.

Just like the trader, the freight forwarder will need permission from the Reserve Bank to do this and must declare for what purpose and for who’s benefit the money is leaving the country. The Reserve Bank may then allow or deny permission based on whether the primary transaction is compliant. It is therefore important for the freight forwarder to disclose when they are contracting services for the sake of a merchanting transaction.

Get a freight quote

Need to get your company registered, SARS compliant and ready for international trade? Our friendly and knowledgeable Customs consultants are here to assist. Simply get in touch to get started.

A guide to SARS import export registration for foreigners
Scroll to top
We rely on cookies to optimise our services and enhance your customer experience. For more information please see our Privacy Policy.
OK
Manage consent